Welcome to the first installment of a new series over here on my blog.  It's called Dad's Album of the Week, to be commonly abbreviated as DAOTW.  My dad died a couple of years ago, and I am now in possession of a bunch of his vinyl.  I haven't listened to most of it.  Telling myself to write about the music will be an incentive to listen to all of it.  (Well, I won't listen to any of the Chicago albums.  See, that was his favorite band, and I heard them all way too many times growing up.)  This series will run on Thursdays, and will generally be brief. 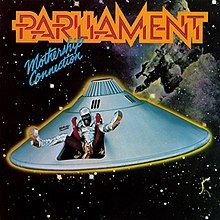 What we have here is legendary music from a legendary crew (including fellow Ohioan Bootsy Collins), and music that will make you move, all the way from 1975.

Sing it with me now: we need the funk, we gotta have that funk